Flying to Raleigh. Going through the ATL airport on one of the busiest days of the year, made busier by a 100-year blizzard that has paralyzed the northeast. Rising at 6, I call the cab at 7:30 for a 10 am flight. Before I even get to the airport, I get a message that my flight has been delayed an hour. My 90-minute flight in the southeast has been delayed by yesterday’s bad weather up north. This is bad.

Every step of this trip is a technological marvel. I called for a cab. They looked at my caller ID and instantly knew my address. They dispatched a cab. Before I was off the phone, I received a text message saying my cab was coming. The cab itself, ratty and smelly, had a dashboard more complex than a single-prop plane: a GPS, a credit-card swipe device, radio contact with the dispatch office (who can track the cab’s every move via GPS), other knobs and interfaces of unknown occupation.

Arrive at airport. Best people watching ever. Doesn’t take long for the excitement and buzz to intoxicate me. I LOVE the airport, and what can be better than the airport at high alert, in full throttle. It’s magical. Other passengers are grumpy, whiny, complaining. I see only the splendor of one of civilization’s greatest marvels – mass transit in the air. I walk slowly, a major grin on my face, smiling at every unhappy glare.

The airport is busy. That’s an understatement. It’s impossible to walk through the doors without unintentionally bumping or bashing into bleary frantic travelers, some who have been at Hartsfield International airport for days.

Every check-in kiosk is busy. People have finally learned how to use them. I locate an empty check-in kiosk on a basement level; the line to the main check-in lane was over an hour long. I wave my crumpled, printed itinerary in front of the kiosk as directed, never expecting it to actually read the smeared barcode, but it does, and instantly pulls up my ticket information. It flies through the check-in screens faster than I can read them, and spits out my boarding pass. Thank you for flying Delta. Now get out of the way!

Flyers stare desperately at the Standby board. One shouts “Yes!” triumphantly as his name is finally called and he is allowed to board the blessed flying machine. Hell is being stranded overnight in an airport.

People. Masses of humanity of every class, gender, ethnicity, and fashion sensibility. There is no better show in town. And no more clear evidence that people are different, completely, inexplicitly different. There is no person here who is any more normal than another.

Women, beautiful, everywhere. Dressed for adventure, whatever adventure means to them. Purple converse high tops with perfectly matched, purple cashmere sweater. Worn, cheap leopard skin jacket with thigh boots. Young people in snappy hats…are hats back in? The Europeans are easy to spot, dressed more admirably in clothes that flatter instead of frown, in shoes and jackets not found on the racks in the States. No baggy pants or untied sneakers here. Wearing apparel in a way that says “These are my clothes,” not “I am my clothes.” I am learning new fashion tips with every step through the terminal—what to wear… and what not to wear.

The terminal. That is where the security checkpoint begins. The atrium of the terminal. The opposite side of the terminal atrium. This is the longest security line I have ever seen in ATL. I check my watch. I want to know how long it will take to reach security. I relax, unlike the family in front of me with two gangly teenage boys, a zombie dad, and a hypercritical mom. Is this a reality show? I watch with interest, and am totally entertained for the 20 minutes it takes to reach security. As I hand my ID and ticket to the harried checker, I look at my watch, amazed. Only 20 minutes. It has taken less time to go through the security line than it took to drive from my house.

A lesbian with her Chinese daughter, the mother attractive, traveling alone, struggling to contain the tiny child. A distant member of My Tribe.

Who’s that drinking beer at 8 am at “Sweetwater Grill?” The bartender pulls fresh draughts from this local Georgia brewery. It must be delicious, but too early for me!

Wheelchairs and wheelchairers, bearing invalid travelers (some who are simply too obese to walk the long concourses), beeping incessantly as they command the aisle. Move over or die!

God bless the weary parents who travel with car seats, strollers, diaper bags, tiny pink coats and hats, little stuffed toys – and go through the security line with all that stuff and pass! How do you get an infant through airport security – with no liquids?!! Later, happy parents, newly arrived, gaily entertain their little ones; tired parents, long arrived, snap, yell, or ignore causing strangers to turn and stare. What’s wrong with those people? They’re just exhausted. 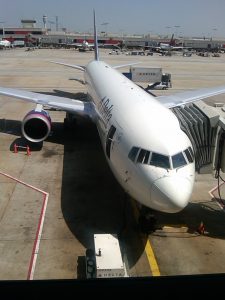 The planes. The planes. The planes. My flight is delayed (again) and I plop before the wide windows and watch the planes. Bright shiny bullets that ascend gracefully into the blue sky and vanish, one after another, in perfect synchronization like migrating birds. Again, a technological marvel. Man can fly.

Just being here is an escape. So many distractions from my own small problems. I could stay here forever. And at this rate, I may.

This entry was posted in Uncategorized. Bookmark the permalink.