Yesterday, I stood outside in 105-degree heat for more than three hours, along with tens of thousands of protesters outside the Phoenix Convention Center. There with two friends, I was surrounded by an extremely diverse cross-section of Americans carrying signs, waving banners, or just showing up to protest Donald Trump: women as old or older than me, white men, black men, native Americans, Hispanics, Boy Scouts (yes, a Boy Scout troop was there providing water). It was truly America. 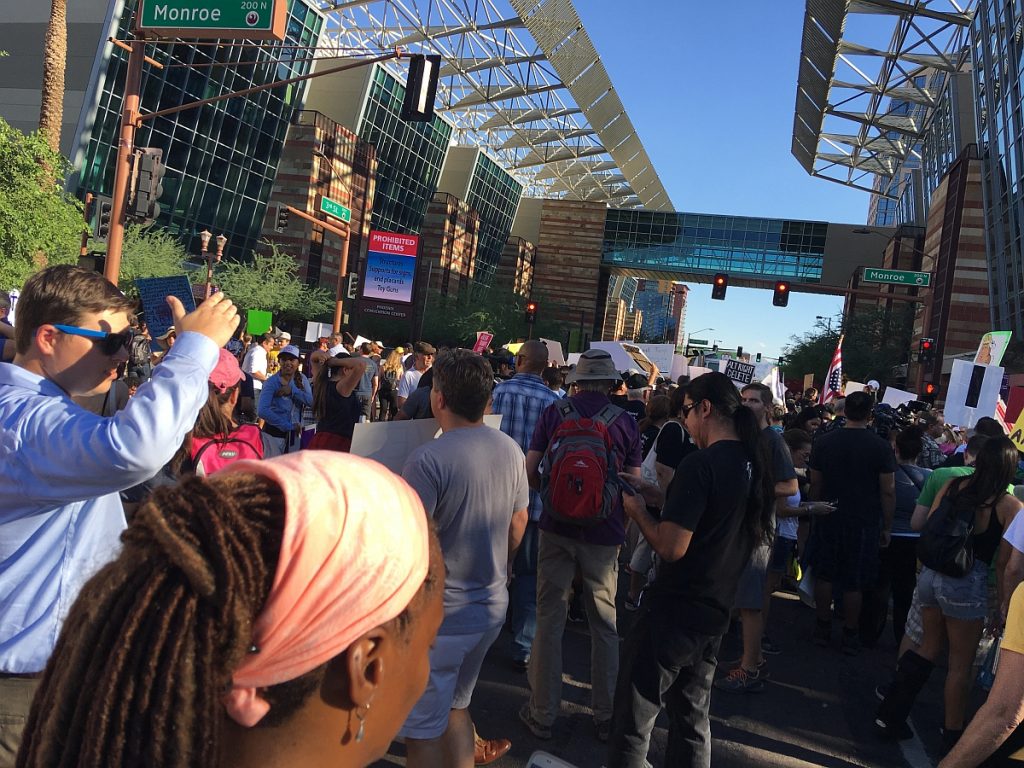 This was my third protest since Donald Trump was elected president. For one of the friends with me, it was her first. We’re middle-aged, upper-middle class women. And Donald Trump called us “thugs” in his speech last night.

I’ve never protested before this year. I’ve marched in a few gay pride parades but that’s about it. And that was for fun. This was fun too, but it was uncomfortably hot and not without a tinge of danger. Two weeks ago, another protester, Heather Heyer, was killed while doing exactly what I was doing. 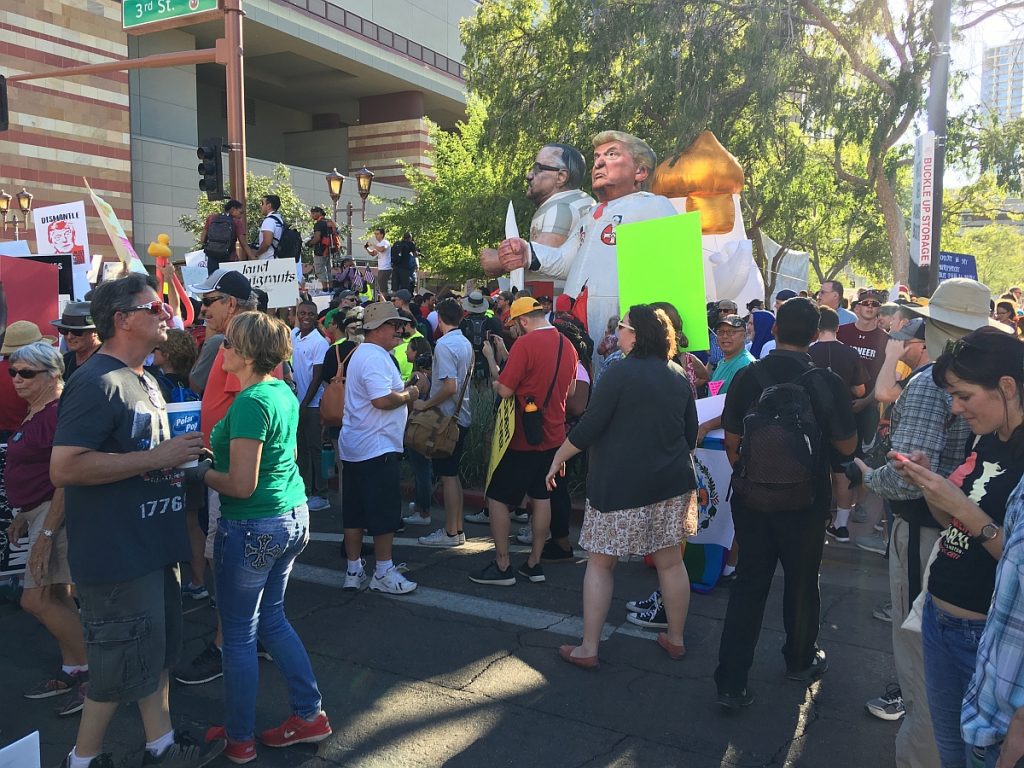 I really had better things to do on a day like this when sweat poured down my back and face no matter how much water I drank. And there was plenty of water available – medics dressed in red t-shirts and other volunteers carried heavy stacks of water bottles through the crowd, handing them out for free. To be sure, I enjoyed the diversity, the incredibly imaginative protest signs, the thrill of being surrounded by like-minded people — but mostly I just attended to my body, trying to keep it from overheating and falling down. 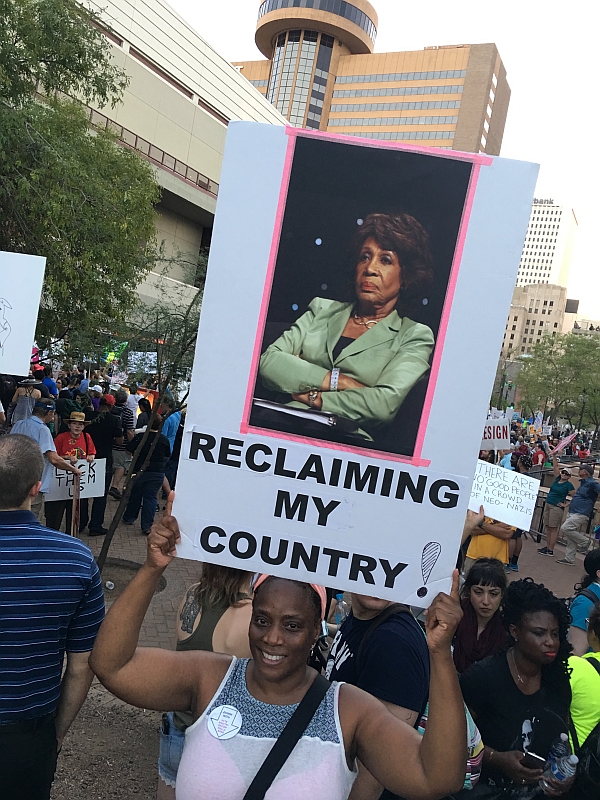 For a little more than three hours, my friends and I stood in the heat in solidarity with every other person there to protest the actions and attitudes of Trump. I don’t want to be an activist but this is one of the most important things I’ve ever done. Silence = complicity. And I strongly believe that white people have to be involved in this push for racial equality in our country. We’ve waited too long on the sidelines and look what happened — the white supremacists are out in force with a friend in high places who hates the media. This is exactly how Hitler began to gain power.

White people, and white men especially, are terrified that they might lose the position of dominance they have held for so long, the white privilege that is afforded them by birth, the misinformed notion that they are better than others. As I watched the white supremacists protest in Charlottesville, I was struck by this: these guys were straight, white men and you don’t get any more privileged than that in our society. And what are they whining about? They’re scared of being “replaced.”

You want the government to change? Get rid of the white guys – they’ve been running it for far too long. You want our country to be greater? Get rid of white male privilege and give all races, genders, and cultures an equal opportunity.

Please Move Away From the Windows

Anyway, back to the protest. About 8 pm, my friends and I decided to head home, along with a lot of other protesters streaming toward the tiny opening in the three-foot high, orange plastic barriers that had been positioned around our gathering. By now, it was dark and still about 100 degrees, and we felt we had done our civic duty. Yay!

We stopped in at the Sheraton lounge about a block away for a well-deserved libation and some blessed AC. It felt good to sit down and sip a cold one and, wouldn’t you know? There was Trump on the TV screens around the bar, still yammering on. We sat near the windows and watched the stream of hot, weary folks leaving the protest but suddenly, those weary folks were RUNNING past us, hands and shirts covering their faces. Billowing behind them came a wave of white smoke and several loud bangs rang out like M-80s on the fourth of July.

“Move away from the windows, please!” came the terse command from our maitre’d. We all looked in confusion at the people running down the street and back at the concerned but commanding face of the woman who had so politely shown us to our seat a few minutes earlier.

She began to frantically wave her arms and repeated her order. “Really?” I asked, as others gathered their belongings and she nodded eagerly at me. Everyone in the bar was herded away from the windows, through the kitchen, and into a hallway at the back of the hotel, as far away from the action as we could get.

There we waited for about ten minutes while my friend read a Twitter feed she had been following out loud to the group. “Tell the cops to stop with the tear gas!” “Jumping over barriers to get away…”

After about ten minutes, the head of hotel security appeared and explained that the police were dispersing the crowd with flash grenades and tear gas. We could return to our tables since there didn’t appear to be any other threat. (Besides the police and the tear gas.) He apologized for the inconvenience.

Just as we were walking by the window to return to our table, another flash grenade went off directly outside. We all flinched. The air outside, thick with smoke, ghosted the people who were clearly suffering from the effects of tear gas, helping each other walk, covering their eyes and faces with anything available. It was a shocking sight.

If we had waited another 20 minutes to leave the protest, we would have been caught in the tear gas instead of sipping cold beer.

I’m not sure what caused the police to behave this way. They claim a protester threw a bottle or a gas canister at a police officer. In the three hours I was there, I saw zero violence. I left just before everything started but it seems like there would be better ways to disperse an already dispersing, 99.9% non-violent crowd than using tear gas and flash grenades.

Several news outlets described the protest as “chaotic” and I will say that it only became chaotic after the police began to use tear gas and flash grenades — that’s what caused the chaos. I’ve never been anti-police; really, I respect the police so much (hand on heart for all the police officers I know).

But this seemed like a bit much. The ACLU is investigating.

I don’t want to be an activist. But until this administration is removed and some semblance of democracy and decency is restored to this country – I have to be.

This entry was posted in Living in Arizona, Politics. Bookmark the permalink.